How did a small town in the Welsh borders come to be twinned with an ancient seat of learning on the edge of the Sahara?

In 2007, Timbuktu began the search for a UK community with which to establish a partnership.  Hay eventually beat off competition from around the UK to be chosen as Timbuktu’s twin, recognising a shared love of the written word and the special resonance between the two communities.  Hay2Timbuktu (H2T) was officially formed, with a vision to:

“gather the people of Timbuktu and Hay-on-Wye to share, exchange and celebrate our unique character, resourcefulness and goodwill to the mutual benefit and enrichment of our two communities”

Understanding and respecting difference is an underpinning principle of Hay2Timbuktu. Our link with “The South”, with a city in one of the poorest nations in the world, brings a global dimension to our lives here in Wales.

2008
A delegation from Hay representing the twinning committee, teachers, medics and artisans visited Timbuktu to explore project ideas. The delegation included three doctors and a secretary from Hay medical centre.
Mohammed Lamine ag Hamid visited Hay to speak at the Hay Festival suggesting the twinning was a beacon of light for Timbuktu.
Dr Toure and Elmehdi ag Wakina visited Hay to explore projects with the Medics4Timbuktu Group.
The artisans group became Jump4Timbuktu which supported the Tuareg Relief charity.

2009
Teachers and members of the Education group visited Timbuktu to develop projects, visit schools and take equipment to aid learning.
The Medics group started a maternal and antenatal health project with one clinic in Timbuktu, with support from the Welsh Government.

2011
The Girls Bursary Pilot project was launched, supporting 50 girls from poor families to access education.
Hay Primary School raised funds to install electricity in a school in Timbuktu.
The Medics group made a second visit to Mali, meeting health professional and NGO staff in Bamako. It was agreed to extend the health project to the other two clinics in the Timbuktu area. The Motorbike Ambulance Project was launched.
Hay2Timbuktu made links with the EU-funded project Two Towns One World to develop greater awareness of the Timbuktu link in Hay and to spread the concept of linking throughout Wales.

2012
Funds were secured to develop a 3-year project to support 50 girls in two schools in Timbuktu.
The military coup and the capturing of the north of Mali by Tuareg and Islamist groups limited progress and communications.
Hay2Timbuktu sent food aid, communicated as much as possible and raised the Malian situation with media and press in the UK and beyond. Funds for the health project were diverted to restock ransacked clinics.
The mayor of Timbuktu expressed in the Guardian his thanks to Hay for the support following withdrawal of many of the aid agencies in Timbuktu.
Elmehdi ag Wakina visited Hay and spoke at the Festival.

2014
The English Speaking Union funded books for teaching English in 3 schools.
The Girls Bursary Project developed successfully with girls achieving higher than average results and a high number continuing to the next level of education provision.

2015
Equipment for 3 schools including books, computers, tape players and tapes, maths equipment, paper, pens, pencils and chalk was sent out to Timbuktu with the Caravan of Hope.
12 Laptop computers with support from Computers4Africa were sent out to 3 schools.
Wales Africa Hub funded remedial English lessons and English language materials for 3 schools.
Arts for All funded a speaker, film and materials to raise awareness in Hay of the situation in Timbuktu.
The motorbike ambulance, having fortunately not been delivered to Timbuktu before the incursions, was finally delivered and commissioned. The maternal project was extended to include child health care for early years as well as maternal health.

2016
Continuation funding to enable girls to complete their education in 2016/7/8 was secured following the success of the 3 year funded project.
Computers were sent to the schools in partnership with H2T.
Medics4Timbuktu sent computers to the 3 clinics working on maternal health projects.
Elmehdi ag Wakina and Mahamane Bilal visited Hay to consolidate education projects, visit local schools and share ideas for development. The English teachers in the partner schools in Timbuktu were denied visas despite well-documented and well-supported applications.

2017
The Girls Bursary Project is in the final year with six years funding giving opportunities for many girls to complete Second Cycle School, attend the Lycée and technical schools with many finding employment and delaying marriage.
Medics4Timbuktu launched a project to fund midwife training for two girls.
A project to provide toilets in three schools was initiated.

H2T continued the funding for 2 girls from 2 partner schools to train as midwifery assistants. This was made possible by local donations. 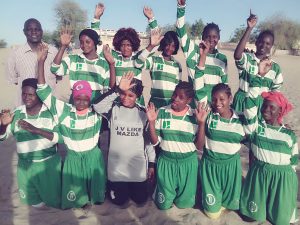 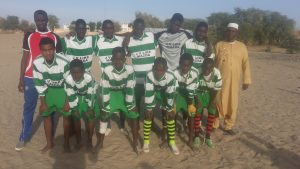 Clyro Church in Wales Primary School ran a hygiene and enterprise project which resulted in a donation for the toilets at 3 schools in Timbuktu.

John Winter and Sandra Skinner visited Bamako since travel to Timbuktu was impossible. Meetings were held with Elmehdi Ag Wakina ( AMSS ), the Mayor of Timbuktu, the British Ambassador, Sophie Saren ( Digital isation of Timbuktu manuscripts ) Postcards from Timbuktu and Ali Sidi ( previously an English teacher in Timbuktu, now a student in the University in Bamako studying to train teachers ) Arrangements were made for the impending funds for the school toilets and for girls education.

A grant from DFID was secured for 2 years to support 60 girls in 3 Second Cycle Schools and for 2 girls to train as midwifery assistants.

Toilets were built in 3 schools and water supplies installed through fundraising and donations from Hay.

Sweatshirts, t-shirts and hoodies donated by Hay Hotfooters running club were sent to Timbuktu and distributed to students in 3 partner schools.

Hay Primary School held a ‘Lights Out Day’ to ascertain the difficulties students in Timbuktu faced with no electricity. This event and a cake sales event raised money to support a Solar lights project. 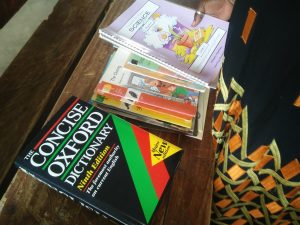 Books from Hay Primary School were sent to Timbuktu.

Grants to support Covid 19 intervention were received from Welsh Government, Wales for Africa grant scheme and from a Foundation for work on messaging ,training and providing equipment for schools and women vendors in the markets.

Donations from Hay supported Covid interventions in the community in Timbuktu.

Solar lamps were installed in 5 Second Cycle Schools in Timbuktu with funds from DFID and local donations.

A grant was received from Welsh Government ,Wales for Africa grant scheme to encourage girls to return to school and girls and women to reengage with health clinics in Timbuktu.

Radio broadcasts, training and equipment for the health clinics and basic washing facilities for 48 families were secured.